Skip to Content Jump to Main Navigation Skip to Search

You Are Here: The Historic Town Hall of Aachen

The Historic Town Hall of Aachen 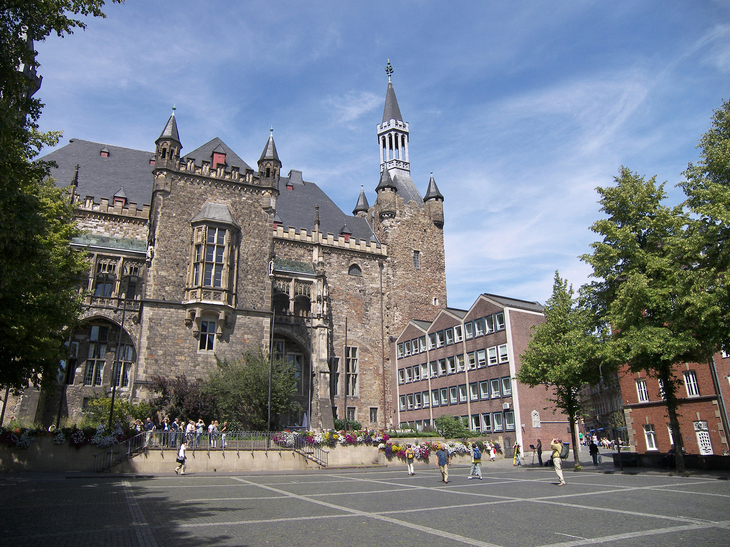 The Historic Town Hall of Aachen

The Town Hall of Aachen along with the bordering Granus Tower to the north and Aachen Cathedral to the south across the courtyard (Katschhof) have been witnesses to the former palatine complex of Charlemagne in Aachen, since the end of the 8th century and until this day. Despite numerous deformations and deconstruction and in addition to the archaeological verified remains of the Carolingian arrangement, these buildings show evidence of the imperial palatine complex as well as Carolingian and medieval original substances in their foundations and ascending stonework.

Start of the Research

Neither proper documentation nor systematic building research of the King's Hall were found in St. Mary's Church (Marienkirche) Research and Science archives despite there being documents on the history of the Aachen Cathedral. The King's Hall was the foundation on which the gothic town hall was later built during the 14th century. This led to the beginning of the first intensive building documentation and research project in the spring of 2007 in the Granus Tower, the former “turris regalis” (="tower of the king"). Within the scope of the course "Bauforschung als Grundlage denkmalpflegerischer Maßnahmen" (= "building research as a foundation for building conservational methods") taught by the research assistants Judith Ley and Marc Wietheger there have been multiple documentation campaigns in field surveys.

The one-week course covers the buildings systematic measurements, drawings, photographs and scientific description, all in cooperation with architecture students. The course teaches practical methods and techniques of examining and handling historical building substances. The results of the course should be precise architectonical drawings and analysis of the structural integrity so that they can be used for preserving as well as restoring the estate.

Goal of the Research

The project was supported by Aachen's Office for Preservation of Historic Monuments since its initiation. Nevertheless, it is the work's primary aim to evaluate the estate on-site and through the analyses of historic sources reassemble the various construction periods and define the building's original form and use.
Using tachymetric-CAD-supported online-measurement, photogrammetrically documented stone surfaces, 3D-laser scanning and manual measurements accurate and current drawings were created. Using a uniform measuring system (3D-polygonal course) it was possible to generate detailed floor plans of each main and sub floor as well as six vertical section plans. This way it was possible to map the construction joints, used materials and damage patterns in detail. This enabled a succeeding analysis of the inner complex spatial structure. Especially the examination of the tower's number of storeys, orientation, accessibility and exposure of the rooms and stairways as well as the connection to the King's Hall.

Soon the advanced work on the Granus Tower is going to be expanded to the historic town hall: a cursory examination of the outside shows a rather informal juxtaposing of both parts of the building, but after intensive investigations the internal layout appears to be an integral planned complex with a spatial concept that depends on a multitude of architectural intersections. The analysis of this internal structure is expected to lead to a deeper understanding of the original architectural plan.

The interim results and objectives of the ongoing building research are being discussed in various committees by expert colleagues and project participants and are also incorporated in the work of the newly founded palatine complex research group in Aachen.